Stocks started the week on a volatile note, with the Dow clawing back from a nearly 500-point deficit to push into solidly positive terrain, as investors absorbed a whirl of economic news.

The Dow Jones industrial average closed up 238.06 points, or 0.7 percent, to settle at 34,049.46. That was a sharp contrast from its morning outlook and Friday’s finish — when the blue-chip index shed more than 981 points to chalk up its worst day of the year and cap its fourth losing week in a row.

Analysts attributed last week’s sell-off to the Federal Reserve’s increasingly hawkish tone on interest rates. Investors had already been expecting a series of 0.25 percent rate hikes, but Fed Chair Jerome H. Powell made clear that a 0.5 percent increase is a distinct possibility at the central bank’s May meeting. Meanwhile, St. Louis Fed chief James Bullard has said 0.75 percent should not be ruled out.

Shares fell sharply Monday morning — the Dow was off as much as 488 points — largely over developments in China, where spiking coronavirus cases renewed concerns about the global economic slowdown. The government ordered mass testing and limited transit in an attempt to contain a small cluster of new cases.

Shanghai has been locked down for more than two weeks, while limited sections of Beijing have entered a state of partial lockdown, according to the Associated Press. Beijing residents have been cleaning out grocery store shelves there in preparation for the possibility of stricter measures, The Washington Post reported Monday.

“China plays a huge part in the global supply chain, so closing factories and ports has created a shortage mentality that is front and center in the financial markets right now,” said David Donabedian, chief investment officer at CIBC Private Wealth Management U.S.

Analysts said the stock market’s afternoon turnaround was probably driven by positive expectations for the slew of corporate earnings coming out over the next several days.

On Monday, Coca-Cola Co. beat analysts’ expectations when it reported a 16 percent jump in first-quarter net sales, but chief executive James Quincey told CNBC that he sees “storm clouds on the horizon” over inflation and China. The company’s stock closed 2.2 percent higher.

Netflix is poised to crack down on account sharing. What happens now?

Analysts view the tech stocks as wild cards, several of which could come with significant downside risks, says Newport Beach, Calif.-based investor David Bahnsen. Each company has its own story, and any one of them could report some company-specific news that hurts its stock price, such as the unexpected subscriber losses that erased more than a third of Netflix’s market value last week.

But Elon Musk’s success in landing Twitter — the social media platform’s board signed off on his $44 billion buyout offer Monday — may have thrown fuel on the fire, said Wayne Wicker of MissionSquare Retirement.

The acquisition “provides a little more confidence in certain deals being consummated despite the dour market environment we’re in,” Wicker said. Twitter jumped 5.7 percent after the company announced the deal, which will take it private. Shareholders will receive $54.20 per share.

Musk’s win could foster interest in the tech sector, which has taken steep losses, Wicker said. The tech-heavy Nasdaq has tumbled 16.8 percent since the start of the year, MarketWatch data shows.

“Technology has been hammered lately, but that’s what led the recovery this afternoon,” Wicker said. “There’s an expectation that strong earnings from some of these companies are going to be well-rewarded.”

Gas prices are up a few cents per gallon from where they stood last week, but they are down roughly 10 cents since late March. The national average stood at $4.12 on Monday, according to AAA.

Why Is the Stock Market Dropping? The Fed Finally Pushed It Over the Edge

Tue Apr 26 , 2022
Text size The market was actually doing OK until Thursday, but then Fed governors started talking. Michael M. Santiago/Getty Images The stock market tumbled this past week as investors finally decided it was time to prepare for the worst-case scenario—a Federal Reserve-induced recession. The S&P 500 index dove 2.8%, while […] 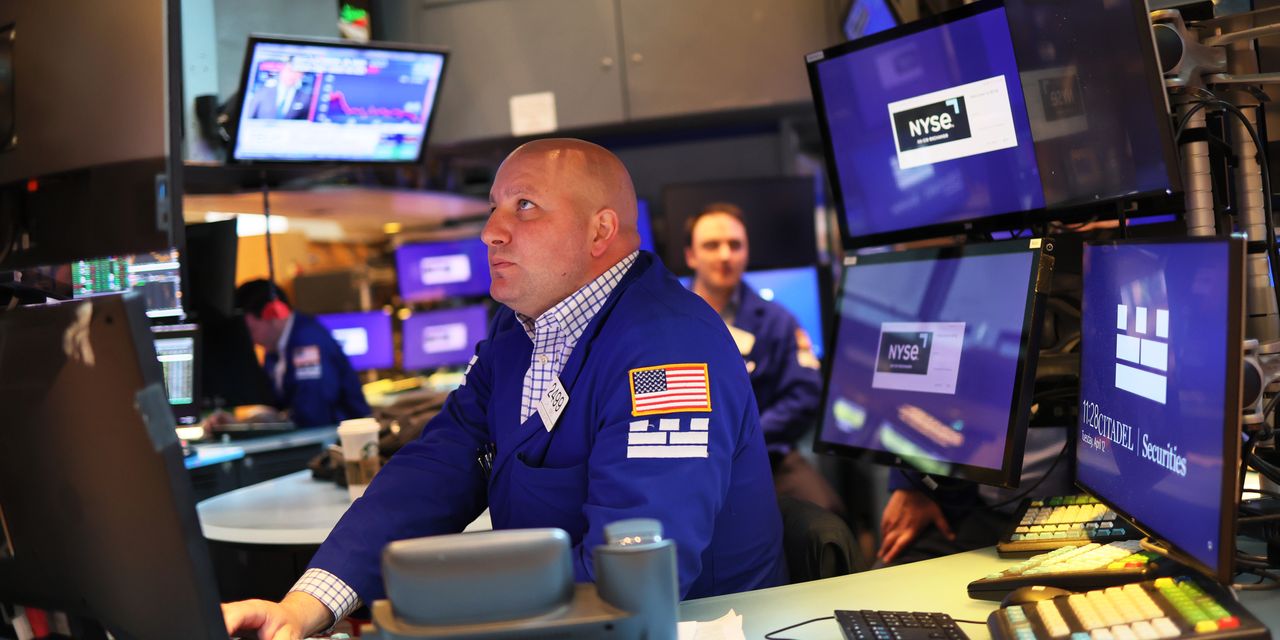