In November of last year, I received a cold call through Facebook Messenger from a person I had never met before, asking me to look at their house concert on Vimeo. A few weeks later, the same artist dropped in on my Messenger to ask me to look at their Christmas release, and then a few weeks later, that same artist wrote to me through Messenger with a new CD to review. I felt very rude and very dismissive for having replied to none of that person’s messages but the thing is: I rarely look at Messenger, tending to focus on my email inbox for business correspondences. Nevertheless, I promised D.C. Anderson that I would find a time to do him a solid regarding his projects, especially the album House Concert – but I started with his video on Vimeo – clearly, the place where it all began.

What I found on his House Concert video was an affable man, no longer a theatrical juvenile, not yet a candidate for retirement, seated on a stool next to a fine-looking (and sounding) piano, performing a set for a living room in which a handful (judging by applause) of people whose laughter twittered when he said something amusing, and who seemed connected to his musical storytelling. The kind-faced Cameron performed his seventy-minute program entirely from his stool, talking directly to his small audience, precisely the way a storyteller should, and singing his random setlist while frequently reading his lyrics off of a music stand. By this point in my tenure, everyone knows the distaste I have for artists who read their lyrics, and the fact that this was a concert happening from Mr. Anderson’s living room seemed to compound my irritation for the presence of sheet music and cheat sheets. In fact, it might have been forgivable if this were a cabaret show with an arc, requiring occasional prompts, but it was, by sheer virtue of the show’s title, a House Concert. Any old random song would do, there need not be even a piece of paper before him to tell him what songs to sing; Anderson could have just called out the name of his next tune and launched into it. Instead, there was this antique music stand filled with sheets and sheets of paper that the singer would flip through, utilize, and then throw on the floor, and some of them, online graphics told the viewer (this reviewer, to be exact), were songs with lyrics by he, himself. And these cheeks burned with anger, and this jaw clenched in frustration, and this head shook with judgment.

But I could not deny that D.C. Anderson has a lovely, gentle, sweet-natured quality about him, and a clear respect for the telling stories. With each song, Anderson invested himself and his skill into the telling of stories. Could I be forgiving enough to let go of preconceived notions from the viewing of the video and form a subjective opinion on the album House Concert, all on its own merit?

House Concert is a good album. It is very reminiscent of the albums I bought at the Cabaret Convention in the early Nineties – albums that were self-produced by the artist, with just them and a microphone and a piano, albums that had a random set of songs that the artist wanted to sing, but that could have been placed in any order on the CD since there appeared to be no trajectory of vision guiding the album. They were albums of cabaret singers, wishing to get their work out there. And D.C. Anderson is a cabaret singer. I’m not sure he is a house concert singer. This is a voice, a talent, and a storyteller of the cabaret aesthetic. Even on the album House Concert, you can hear D.C. Anderson telling stories, and it happens immediately with a lovely, emotionally invested, articulate performance of “Some Enchanted Evening” that is tender, theatrical, and visceral without ever becoming coy. Mr. Anderson is not afraid to use all the parts of his training when it comes to the telling of his stories, he is not afraid of being thought of as affected or pretentious. When he performs this song, with his mouth justthisclose to the microphone, almost whispering those famous Rodgers & Hammerstein words and notes, for the most perfect effect possible, the listener will know that D.C. Anderson has come to tell stories.

And storytellers are so important.

On his thirty-two-minute album, Anderson uses songs from varying songwriters to show his storytelling versatility, performing everything from musical theater to folk songs to the ballads for which he seems to have a particular predilection. He tends to avoid up-tempos, though there are one or two on the album – a jaunty “Sooner or Later” is quite fun but a parody of “Can’t Help Loving That Man of Mine” falls absolutely flat as something that is completely and totally out of place among all these profound and pretty ballads. There is, though, excellent dramatic tension in “Crazy Still to Do” (one of Anderson’s own) and extreme heart in Todd Almond‘s beautifully haunting “God is Good” and Anderson is successful at placing admirable focus on changing the textures of his bright and open vocals to match the emotional hues of each composition. His years of training as an actor join hands with the natural clarity of his voice to provide each of the eleven songs with their own presentation – as though each song is a painting unto itself and Anderson is using his voice as the master craftsman created frame being used to, best, display the painter’s creation.

Particular highlights for this writer were a number from the Anne of Green Gables musical (“I Wanna Know”), Brourman & Rollins lilting and touching “While There Is Still Time,” and Anderson’s own “Song for Artists,” composed with his sister, Claudia Anderson. The song, the performance, and the message are all absolutely beautiful and the Andersons should seek out artists from all genres to take their shot at interpreting the composition, one that this writer wishes everyone would know. It is very reminiscent of my favorite track from the Nancy LaMott Beautiful Baby album, the simple and eloquent “In Passing Years” by Rick Jensen. That album by LaMott, by the way, is one of those CDs I bought at a cabaret convention – a CD where it was just Nancy and a few musicians in a recording studio, getting her music out there. Although House Concert is just Anderson and pianist David Robison, the vibe is very much the same as Beautiful Baby – a cabaret album of a cabaret performer telling stories with emotion, good music, and fine focus on the art form of storytelling.

D.C. Anderson HOUSE CONCERT is a 2022 release on the Davecamson Music label and is available on all platforms.

Tue Apr 26 , 2022
Life After BOB Columbia’s Digital Storytelling Lab announced its “Digital Dozen” earlier this week—its annual list of the most innovative examples of digitally enabled storytelling. Unlike other awards programs, this one has no categories, so what you saw was a typically eclectic mix of XR, immersive theater and interactive installations, […] 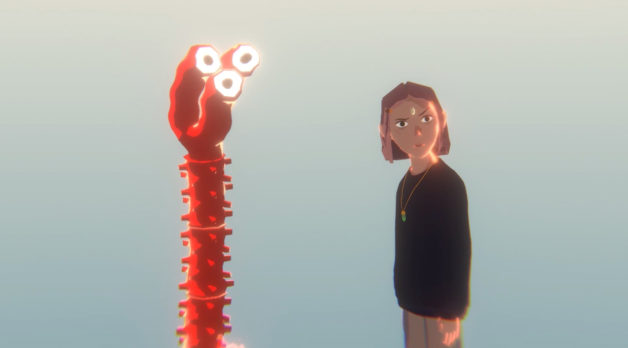