Here are the most important news, trends and analysis that investors need to start their trading day:

U.S. stock futures were essentially flat Thursday, as the key release of May inflation data, set for Friday, moves further into focus. Traders also are monitoring the European Central Bank’s latest interest rate decision Thursday. Wall Street closed lower across the board a day earlier. The S&P 500 dropped 1.08% on Wednesday, while the Dow Jones Industrial Average and Nasdaq Composite lost 0.81% and 0.73%, respectively. The only sector in the S&P 500 that finished up Wednesday was energy, closing at its highest point in nearly eight years.

All three major U.S. stock indexes broke two-day win streaks Wednesday, as investors continued to watch the bond market and look for new information on the trajectory of economic growth. The Dow is now essentially flat for the week and nearly 11% below its record high. The S&P 500 is up 0.18% week to date and 14.6% off its peak in early January. The Nasdaq is solidly in the green for the week, up 0.61%. However, the tech-heavy index is still entrenched in a bear market, sitting more than 25% below its all-time high in November.

The yield on the benchmark 10-year Treasury note remained above 3% on Thursday morning, after jumping above that psychological level Wednesday. U.S. government bonds prices, which move inversely to yields, have trended lower this week. The yield on the 10-year Treasury ended last week at 2.941% and as recently as late May stood around 2.71%. Stock investors have closely watched the rise in bond yields in 2022, as higher interest rates typically pressure growth-oriented tech stocks that have significant cash flows projected in future years.

Oil prices were basically flat Thursday. U.S. benchmark West Texas Intermediate crude declined by about 0.2% to around $121.90 per barrel. Brent crude, the international benchmark, traded at $123.48 per barrel, right around where it finished Wednesday when WTI and Brent both settled at their highest levels in two months. The recent rise in oil prices has come as China’s Covid reopening is expected to spur more demand while supply concerns elsewhere persist.

Shares of Tesla rose 3.5% in premarket trading Thursday, as UBS upgraded the electric vehicle maker to a buy. Tesla’s stock has struggled this year, down more than 30% year to date as of Wednesday’s close. Despite that steep pullback, UBS wrote to clients that it was “time to be bold” with the stock, adding that the company’s future is still very bright. The premarket gains for Tesla come after shares rose 1.25% on Wednesday in an otherwise down day for the S&P 500. Tesla has the sixth-largest weighting in the S&P 500.

Target said Thursday that its board of directors approved a hike in its dividend. The quarterly payout will increase by 20% to $1.08 per common share, up from its prior level of 90 cents. The Minneapolis-based retailer is a member of the S&P 500 Dividend Aristocrats index, comprised of companies that have increased their dividends annually for the last 25 years; Target said 2022 will now be the 51st consecutive year that it’s done so. Thursday’s announcement from Target comes two days after the company warned its fiscal second-quarter profit would be squeezed as it took aggressive steps to get rid of excess inventory. Target shares, which are down over 30% year to date, rose by 0.76% in premarket trading.

5. Apple subsidiary will extend loans for its Pay Later service

Apple intends to use a wholly owned subsidiary to check credit and extend short-term installment loans to the users of its new buy now, pay later service. The iPhone maker announced the new offering Monday as it kicked off its developer conference; it will be called Apple Pay Later and will be available later this year, when new iOS 16 iPhone software is rolled out.

The additional details about Apple Pay Later reflect the technology giant’s ambitions in the fintech industry. While Goldman Sachs is involved as the technical issuer of loans made through Apple Pay Later, it is noteworthy that Apple is, effectively, keeping the credit decisions in-house and using its balance sheet to issue the loans. Buy now, pay later has grown increasingly popular in recent years. Start-ups like Affirm made large enough waves that established fintech firms like Square parent Block struck deals to buy existing players, while PayPal launched its own offering.

Thu Jun 9 , 2022
click to enlarge Courtesy photo Satori Shakoor hosting the Secret Society of Twisted Storytellers. The crowd is hushed to a deafening silence as Rev. Edward Knox relives having to identify his son’s lifeless body. His hands tremble and a tangible pain pours from his voice as he tells his story […] 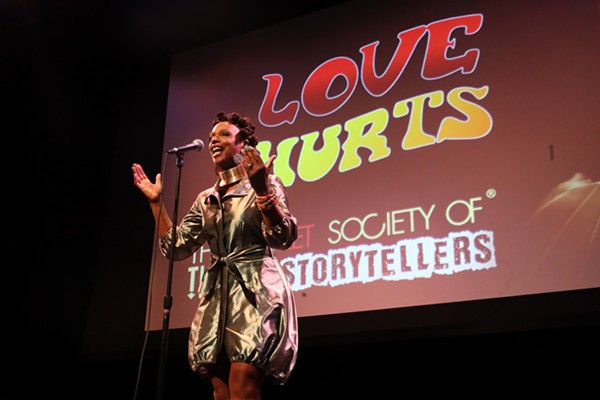